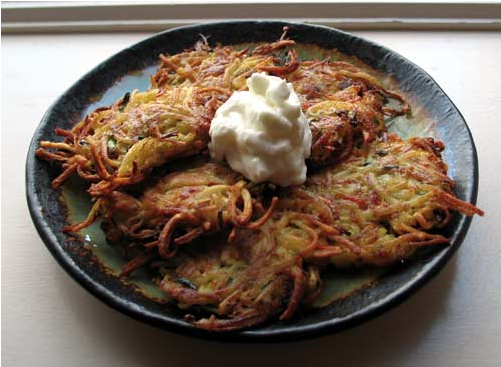 This recipe was featured on NPR a few years ago in a discussion about the large Jewish population in Mexico City. We added some Farmhand Organics pickled peppers, served with Jonny Applesauce and Pear Sauce and what was once a Passover treat became a staple. Enjoy!

1) Using a box grater, coarsely grate the potatoes into a medium-size bowl. Add the egg yolk, peppers, salt, and matzo meal; mix well and let cool in the refrigerator for five minutes to allow ingredients to bind.

2) Remove bowl from refrigerator and drain off any excess liquid.

3) Over a medium flame, heat ½ cup olive oil in a 10-inch skillet until hot but not smoking. Take 1 heaping tablespoon of the potato mixture at a time and place into the pan, being careful not to crowd the latkes. Cook each latke until golden brown on both sides (approximately five minutes total).

4) Transfer latkes to a paper-towel-lined plate, add additional salt if desired. Add ¼ to ½ cup of olive oil (if needed) to pan and repeat process with remaining latke mixture. Keeping a good layer of olive oil in there really improves the flavor

All stories by:
Local Food: What is Possible?
Eat Probiotics, Feel Probioawesome